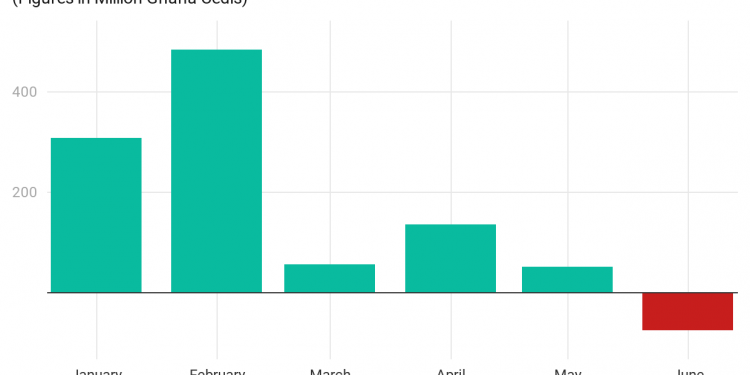 Ghana’s total exports for the first 6 months of 2020 exceeded its imports by 963 million dollars. That’s according to the latest statistical figures from the Bank of Ghana.

Trade Surplus refers to the amount by which the value of a country’s exports exceeds the cost of its imports.

The surplus, when compared to what the country recorded in the first half of 2019 represents a drop of about 33 percent.

The reduction was impacted by the first monthly trade deficit recorded in Ghana in almost a year.

Dr. Lord Mensah, an Economist and Senior Lecturer at the University Of Ghana Businesses Schools, has thus called for increased investments along the value chain of Ghana’s key commodities to ensure a return to positive trade balances in the short to medium term.

“If you talk about our cocoa for example, some of the main export destinations are the UK, China and all those places. And those were the places that were hard hit by this Coronavirus, and I’m sure obviously consumption for cocoa products will be affected, and factories were also shut. So it will have an impact on the export for cocoa and all those traditional products that we deal with to balance our trade.”

“Once markets get opened and economic activities start picking up; I think we should see those numbers going up, and therefore that surplus trend that we have been enjoying will continue to come up. Our strength which is mainly in the export of cocoa and export of gold should be enhanced and more investments should go into those areas so that we can increase our exports in those traditional commodities for us to realize those positive balance of trades again.” 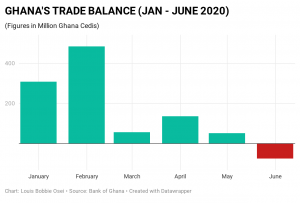 The year begun with the country exporting a total amount of $ 1.4 billion dollars in Gold, Cocoa Beans, as well as Crude oil among others for the month of January.

In the same month, the import of oil and gas products as well as other non-oil produce amounted to $ 1.1 billion dollars, leading to an overall surplus of 308 million dollars at the start of the year.

The monthly surplus trend continues throughout the year until the first negative trade balance in a long time was recorded in June.

Source: citibusinessnews
Spread the love on your social media page
Have Questions? Chat with us