Ghana has recorded its lowest National year-on-year inflation rate since the country recorded its first Corona virus case in March.

The inflation rate for August which is 10.5 percent represents a 0.9 percentage point drop from the 11.4 percent recorded in July this year. The significant reduction was influenced by the lower inflation levels of food items in the country.

“Principally this is the first time since April 2019 that we’ve recorded the lowest food contribution to year-on-year inflation. Since April 2020 we’ve been within the region of 50.6% – 53%, and this has been a consistent increase over the past 4 months, that is between April and July 2020. And for the first time the contribution of food has reduced to 47.9 %, which means that other divisions are contributing more than 50% of the total inflation figure we recorded in the month of August 2020.” 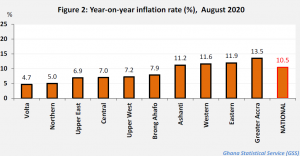 Impact of COVID-19 on year-on-year inflation

Prior to the announcement of the first cases of Corona virus in Ghana on March 12, 2020, inflation in the country had remained fairly stable for months recording 7.8 percent from January to March. The annual inflation however jumped to 10.6% in April from the 7.8% in March, driven by higher food and commodity prices due to a rush for items, in areas affected by the government ordered lock downs. After witnessing general rises in the following months, with July recording an inflation of 11.4%, the month of August recorded an inflation rate of 10.5%.